That statement induces a profound amount of fear and anxiety in entrepreneurs. While the average person probably looks on such a time with excitement – an entrepreneur is left wondering whether this will be the time for which their sales spike or plummet.

The only other type of human out there that is anxious about Christmas are children. They’re wondering whether or not they’ve been put on the naughty list; doomed to a year culminating in nothing but coal in their stocking.

So here we are, alongside the world’s children – asking the question, “have we been naughty or nice this year?”

We at BetaBlox hope the answer is NAUGHTY!

Whether entrepreneurs like it or not, sometimes we have to break a few societal rules. For rules were built to prop up whatever the status quo is; thus rules are counterproductive to innovation. What follows are some “rules” that we strongly believe were meant to be broken. Whether they are societal norms, or business norms – there isn’t room for them in the majority of startups. So if you find that you haven’t broken enough of these rules this year, there’s always next year.

Let it be noted before we continue this essay, we are not condoning any type of behavior that is unethical, or especially illegal. This essay is meant to fall in-line with the holiday spirit whilst emphasizing a few important points. We urge you to be naughty in the sense that your startup marches to the beat of its own drummer boy – and we definitely urge you to also be nice. Because let’s face it, mean entrepreneurs suck.

Meetings Don’t Have To Be An Hour

Let’s start off by saying that meetings should be a last resort. Almost as if having a meeting is the result of a failure in some other communicative process. If you can’t get around them, they should be the length of time it takes to relay the requisite amount of information needed. If that is nine minutes, the meeting should take nine minutes.

Wondering what irrelevant people think, and then adjusting strategy to compensate for them – happens all too often. The millennials call them haters; the Gen X’ers call them barking dogs. You will have them at each and every stage of your company. The first of which will say you can’t do it. The second ones will arrive when stuff starts to work and deny your traction is relative to to an increasing likelihood that you’ll successful. And the last ones will denounce your success to nepotism, unfair advantages, and luck. Ignore these people. The only types of haters you should be worried about are a lack of haters. If you have none, there is a good chance you’re doing something wrong. 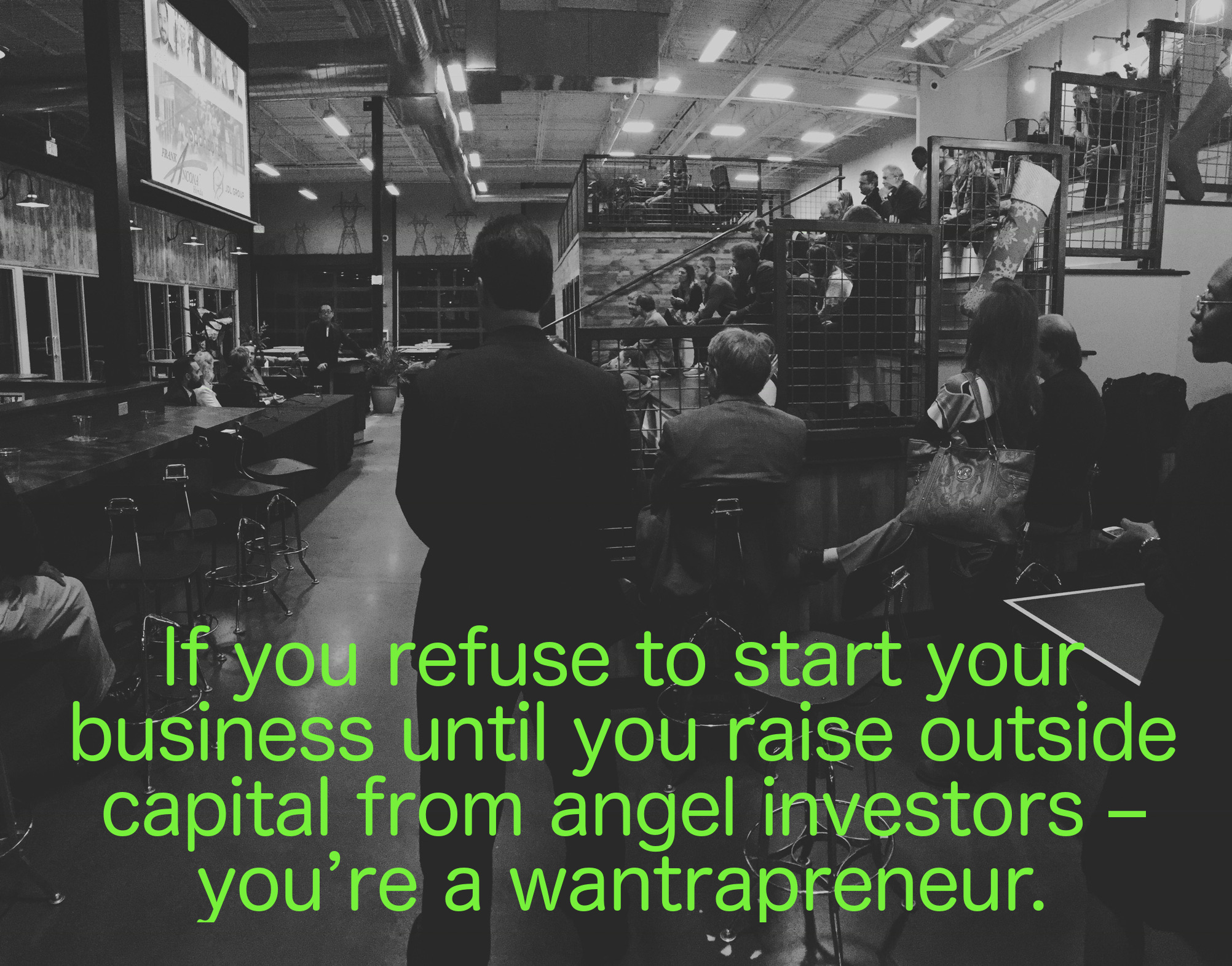 As much as us Tulsans and Kansas Citians pride ourselves on going to coffee with anyone that asks, maybe it’s time that we stop doing so for people like the ones mentioned in the last paragraph. There are thousands of entrepreneurs in Kansas, Oklahoma, and Missouri that are actual startups that need the mentorship and support. Let’s give it to them and temporarily ignore the people that aren’t ready for the real deal. Our two cities spend a disproportionate amount of time coddling people that haven’t proven they deserve it yet while we ignore the ones that are in the trenches. BetaBlox does the opposite – and we implore you all to do the same.

Building things “for scale” implies that you know for a fact what your demand levels will be, and how you got there. Which means you must be there. Building for scale before you’ve proven what works means you’ve prioritized items above the things that matter: building something people want. Consumers don’t care about your ability to scale, they care about your ability to solve their problems. So do that first, and then worry about the fluidity of your growth later. Don’t get us wrong, scaling is important. But it’s step two. Step one is proof you’ve built something worthy of scaling.

Making Things Pretty Is Less Important Than Getting Things Done

In a world that appreciates beauty more than ever, let us be amongst the few to say this can be a cancerous attitude in a startup’s formative stages. Not that your products and design shouldn’t eventually be beautiful – but concentrating too heavily on those things at first can be a mistake. We’re not saying to make things ugly on purpose. We’re saying that an entrepreneur’s list of things to accomplish on a monthly basis is beyond long and complicated – worrying too much about design at these stages means that less things on that list will be accomplished. Get your company off the ground and then circle back around and start making things beautiful. The exceptions to this are products that are essentially selling beauty, like fashion or art.

For the longest time society taught us that failure was a bad thing. It put processes in place that sensitized us to mediocrity. It placed rampant stigma upon mistakes that bred an unhealthy fear of risk. That fear slowed innovation because the commercialization of a new idea is and always will be inherently dangerous. But then a cool thing happened; over what we would consider the last ten years or so, you started hearing things like, “failures are just the requisite steps towards success.” We wholeheartedly agree with this statement, and most others like it. We agree that failure is an inevitable aspect of our journey to success. BUT, we’d like to change up the definitions a bit.

What the world is defining as failure is what we like to think of as just invalidated guesses. For example, an entrepreneur might have thought their price should be $500, when in fact customers would only pay $300. Or, an entrepreneur might have thought that retail was the best distribution channel, when in fact it was through multi-level-marketing. These aren’t failures, they’re just missteps. Said missteps resulted in clues that the entrepreneur then used to perform the next activity better. We don’t view this process as a bunch of failures. 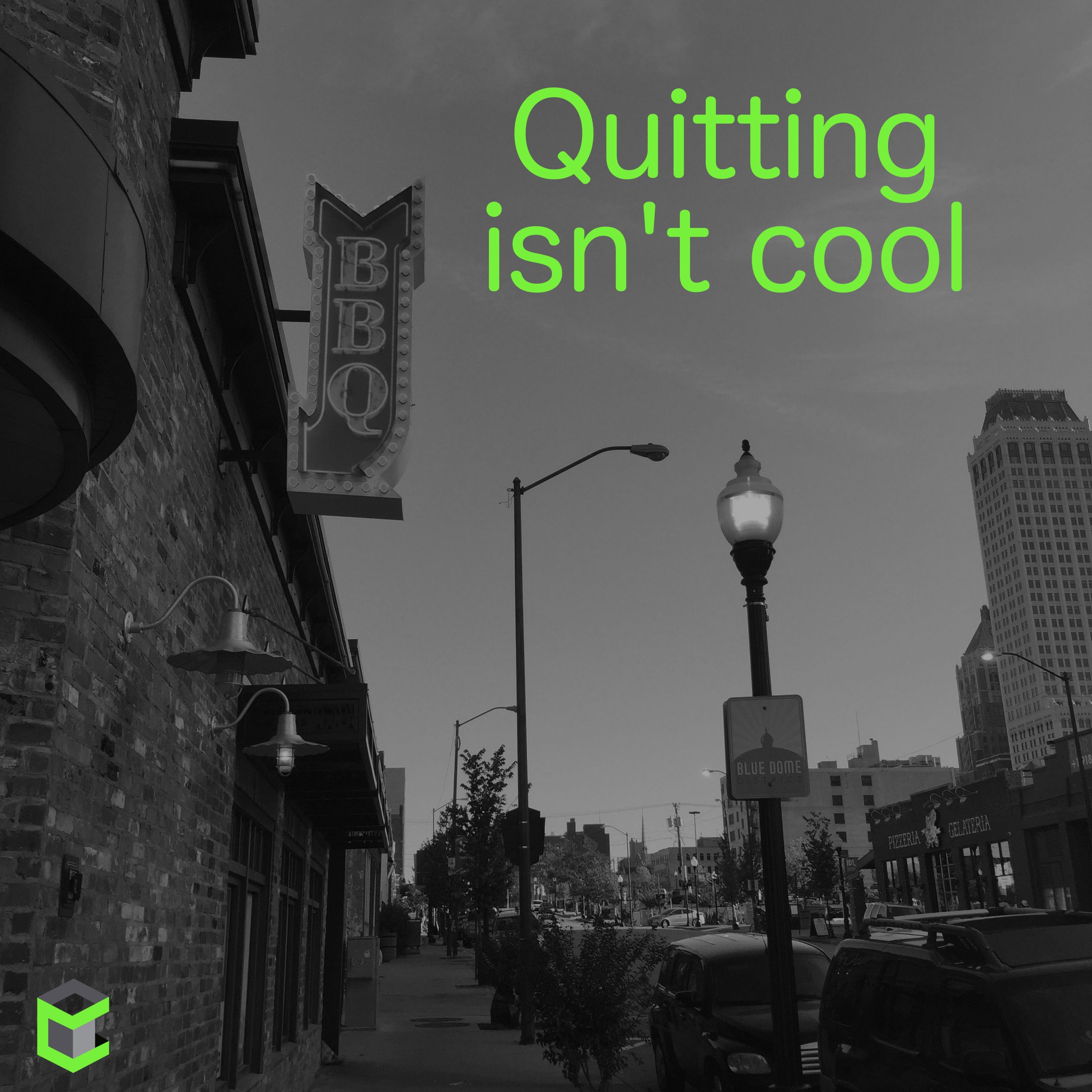 There is only one type of failure in our book: quitting. If you quit being okay with these missteps; if you quit morphing and evolving your product; if you quit sacrificing your time and money: that’s what we define as failure, and we’re not okay with it. We’re okay with many many many missteps, but we believe that quitting should be met with far more distaste than what society wants us to give to startups.

We don’t want you to be a willy-nilly gunslinger that makes haphazard decisions – but we also don’t want you to park your butt in front of a whiteboard for a year while you plan out your flawless execution. A little bit of research; a little bit of asking around; a short meeting or email with your mentors – they all lead to value and an increased likelihood of making smart decisions. But much more than that and you’ll reach a law of diminishing returns. In other words, every hour of research will provide far less value than the hour before it. So stop planning like they taught in business schools in the 90’s and start accomplishing. 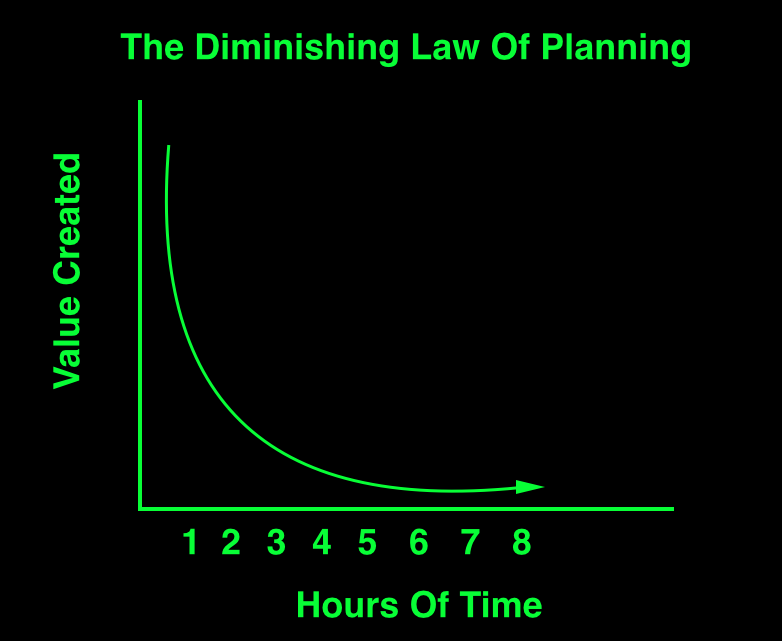 Growth For The Sake Of Growth Isn’t Cool

Your data should tell you when it’s time to grow, not your ego. Not the press. Not your startup friends. The data.

Growth = mass. Mass = inflexibility. Inflexibility = harder to grow. A resource constrained startup has an advantage. They’re forced to build something lean and mean; something so flexible and fast that it has not one ounce of unnecessary mass associated with it. By mass we mean things like employees, code, processes, inventory, etc.

An analogy: look the various body types of track and field athletes. Compare the sprinter to the marathoner. The sprinter is muscular and tall – the marathoner is lean (but still having her due amount of muscle). In-part, this is obviously due to heredity. But more than that it’s due to the fact these athletes have trained their wholes lives for this particular type of event. If they had trained their whole life for a different event, their bodies would look different. Well guess what? Building a company is a marathon. If we build up our mass for a sprint, we’ll never even be able to complete a marathon, let alone win one. As we grow, any original mass that we built into the startup has to be lugged around everywhere we go. The same thing happens to a marathoner. An extra pound of muscle might not seem dangerous, but that single pound has to be carried 26.2 miles.

Stop Saying That Not Having Time Is An Excuse

Funding Is Stupid More Times Than It Is Smart

Sometimes funding is the brilliant next move. But most of the time, it’s not. We’re aware this hurts the feelings of everyone in Kansas City and Tulsa that complain there’s not enough funding – but it’s true, and we don’t apologize. When you take on funding, you have to realize the venture dynamics of professional investors. They play a binary game with two options for your outcome: giant win or complete failure.

An example…if you sell 50% of your company to a venture capitalist at a $3MM valuation, that venture capitalist won’t consider your outcome to be a win until they get about 10X their money. This means you have to sell your company for $30MM (or more) for them to get the return they’re looking for. And when this happens, you’d make $15MM. But what happens if you get an acquisition offer for $15MM after taking their money? They’d probably veto the decision because making a small return like this isn’t an option (remember, it’s either a home run or nothing).

All we’re saying is that startup fundraising from angel investors and venture capitalists is not for every company. Yet every entrepreneur, by default, seems to think quite the opposite. Thinking like this takes an entrepreneur’s eye off the ball, which at the early stages should be centered exclusively around making and selling things. A time will come when startup capital is the exact step you should take, but it’s seldom amongst the first.

Stop Saying Yes To Everything

Your default answer to everything should be ‘no’. We’re aware this sounds like the mortal enemy of innovation. But it’s the opposite. As your startup begins to take flight, you’ll be pulled in a million directions. Your staff will want new processes. Your customers will beg for new features. The press will nag you over doing or not doing certain things. And worst of all, even you will come up with ideas that have no place in a disciplined and focused company. Entrepreneurship isn’t about saying yes to everything. It’s about saying yes to the right things, in the right order – and telling everything else to cool it while you work on the priorities.

There you have it entrepreneurs – a list of the all the rules that one might think shouldn’t be broken. But an important question should be, “who made those rules to begin with?” An even more important question, has society ever…and we mean EVER…changed Santa Claus’ mind about who should be on the naughty or nice list? So if Santa says it’s okay to make your own rules, then surely it is.

It’s our contention that startups spend an exorbitant amount of time catering to norms that should simply be ignored. Some might call that being naughty. But in the world of entrepreneurship, the naughty startup gets the Red Ryder BB Gun.