Every Business Succumbs to Demographics…

Your customers’ demographics greatly affect their purchasing decisions: where they live, their age, gender, ethnicity, relative affluence and other quantifiable ‘hard’ data about them. Marketers love this data. It makes it easy to slice and dice their target markets. They have been catering their messages to these statistically similar audiences for centuries. But they are spending all their time trying to figure out “Who?” and “Where?” their customers are while forgetting to ask “When?”  As in, when in the lifecycle of a product do customers get interested? Asking “When?” is more important to a startup than any other stage of business, so if you’re in the formative stages of starting your company, listen up.

Only One Type Of Customer Cares About Buying Things From Startups

A certain percentage of the population demands to be the first people to try anything. The business community calls these people “early adopters”. They’re the ones who stood in-line for the first iPhone before anyone had any idea what it could do. They’re the ones who need the newest Nikes. Or they’re the B2B company looking for the edge over their competition. We all know people like this. What startups need to remember is that every industry has their own versions of early adopters. We must find a way to cater to them, engage them, build the relationship, and ultimately sell to them, because when we succeed at making an early adopter happy, they turn into our most powerful evangelists. 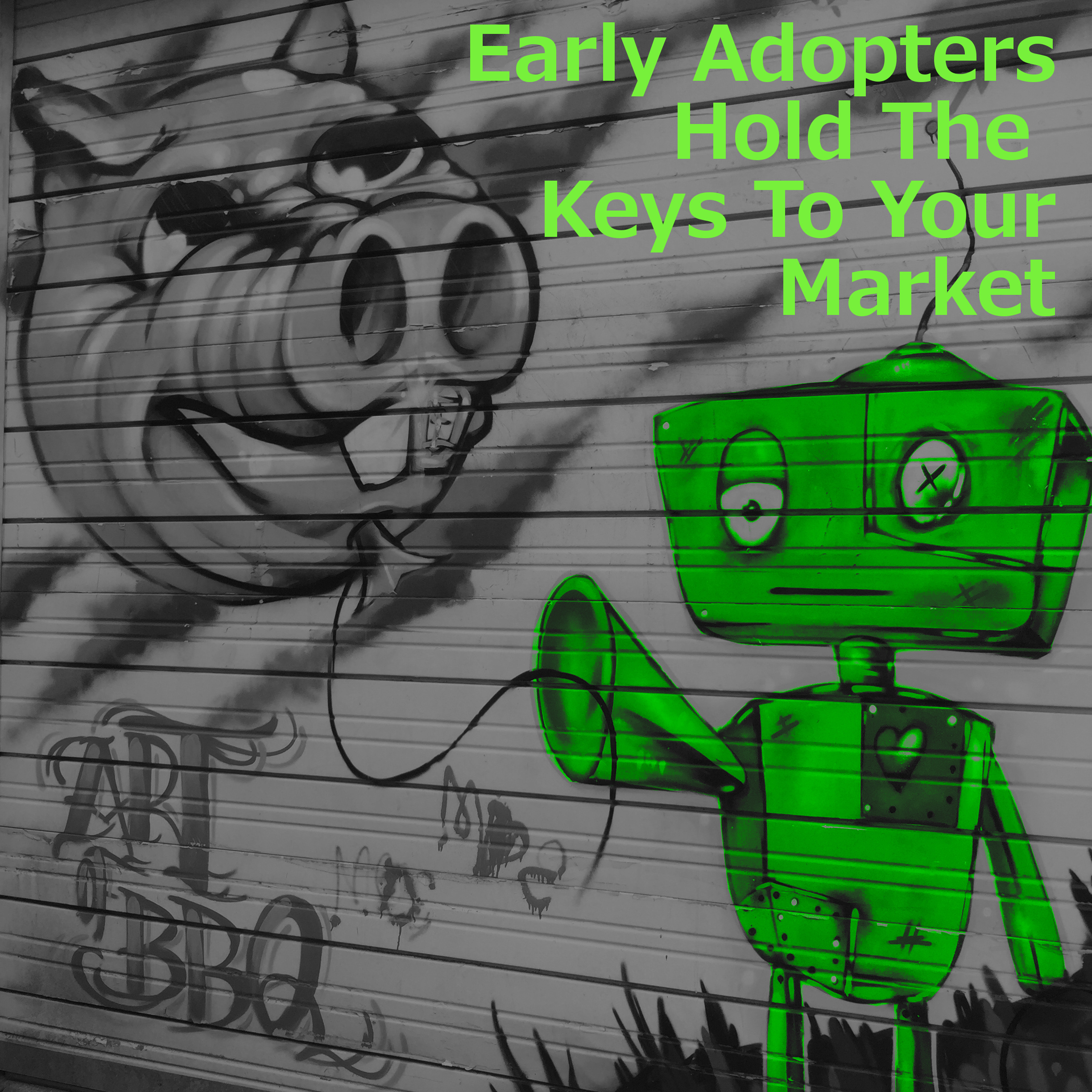 Early Adopters Are Comfortable with Imperfection and Risk

Instead of starting by catering to the mass majority at the outset, which is years too early for that particular psychographic, startups should first spend a couple years exclusively selling with early adopters in-mind. Don’t worry about perfect design, bug-less software, and highly compensated customer service teams.

Remember, no matter how great your thing is, most of the population is going to wait and watch other people be your company’s guinea pigs. They’re called laggards; they’re the people that waited five years to get their first iPhone or the people that only got a Facebook account a couple years ago. They’re the exact people that your startup doesn’t have time or resources to pursue… yet.

Instead, seek out and sell to the early adopters. They’re ridiculously more okay with imperfections in your offering than the mass majority. They forgive these initial design flaws because their priority is to get something new before anyone else.

Early Adopters Have a Powerful Voice

The mass majority wait in the wings as they watch the early adopters tout their new products on social media. They wait until they can read their reviews on Yelp or Amazon. They subtly seek out the early adopters and engage them in conversations about things they’re interested in buying. They try to strip as much of the risk away from the purchase as possible. If you skip selling to early adopters, your social media/yelp/water-cooler-talk will be ghost towns. Your story will be hollow and your stred-cred will be missing.

Early Adopters Are Willing To Pay A Premium

Early adopters are essentially professional consumers. They care so much about the identity that this class of psychographics represents they’re willing to pay more for your products. “New” = value, and value = more money. Being able to charge more for a product will help cover your startup costs; things such as R&D, new hires, re-tooling, and expanded warehousing.

So by this point you might be asking how the heck you find and sell to this elusive group? The most important element is that you show off your personality.

Early adopters are over corporate America. They’re over things that sound like they’ve been written by lawyers. They’re over average or mainstream. They want the businesses that they buy from to exhibit human-like qualities, especially the younger crowd.

Humans have personalities. They have wit. They have swagger in their step. So if your business is to exhibit human-like qualities, it must do all of these things. Personality should ooze out of every opportunity to communicate to your market.

Early Adopters Demand That You Stand for Something

This segment wants you to draw a line in the sand and stand for something. They’re over mediocre options that cobble together sub-par solutions to a handful of problems. Instead, they demand you kick major butt at one or two things. They don’t want to purchase anything from a startup that appears to be selling too broadly. So pick a side. Make a decision. It will create a certain percentage of haters, but those haters will also attract the majority that agree with the side you’ve taken.

Every Marketing Message Needs To Be Catered To This Segment, At First

Your 404 Error pages, your contact details, your emails, your LinkedIn account, your social media biographies – literally everything needs to have early adopters in-mind when you create it. Play up the new, the different, the side of the argument that you fall within. Put it out there in a way that almost feels exaggerated or cartoon-character-ish. As you’re creating content like this, it might feel a little dramatic, but it’s the best way to differentiate yourself in a world of clutter. Later, you’ll tone all that down as you gear up for the mass majority of risk-intolerant consumers that you’ll eventually need in order to get to the next level. 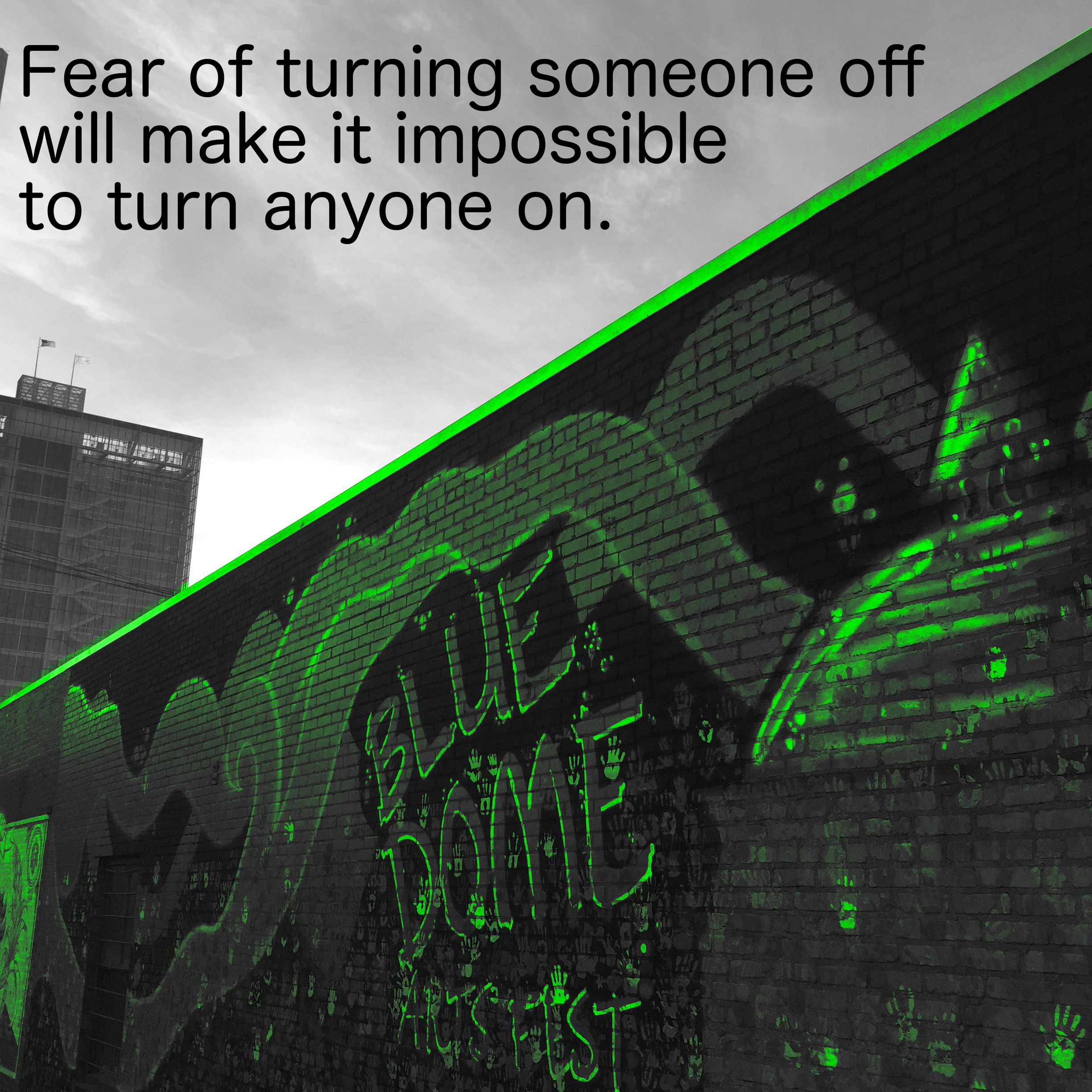 Selling Something to Everyone Is Selling Nothing to No One

Early adopters are more aware than ever that they have choices. Those choices are not only abundant, but thanks to their phones, readily available in a matter of seconds. Packages and bundles are no longer preferred. Consumers want offerings that are de-bundled. They want you to be the best in the world at a single feature, and they want you to stay away from touching anything else until you’re prepared to be the best in the world at whatever’s next, too. Specialization also has several other hidden advantages such as the ability to more quickly design an MVP, lower costs, and makes your advertising dollars go farther because the story you’re telling is more memorable when it’s more specific.

We imagine that there will be a select few that read this and ignore these messages. They’ll try to de-risk their product, and take too long to launch. They’ll de-humanize their messaging in an attempt to not turn anyone off, and in the process not turn anyone on. They’ll cater to two schools of thought in the industry, ultimately pissing both sides off. And that’s fine. You do you, Mr. Average. But for everyone else that wants to make a sustainable dent: heed this advice. A startup’s job is to cater to early adopters; a business’s job is to cater to the mass market. Forget which one of these are you at your own peril.

These are the questions we ask the startups that dwell within our Tulsa Business Incubator, week-after-week. You should be asking yourselves the same thing. Happy venturing!