Startups: Patents Aren’t What You Think They Are

One of the biggest misconceptions throughout the world of early-stage entrepreneurship is that of patents. It’s like every entrepreneur was brought up in a magical world where a single document precludes the big and scary world from infringing upon their idea. Even worse, it’s like everyone they’ve been surrounding themselves by keep advising them to “get a patent”. But let us set the record straight: in approximately 99% of situations – this is the wrong move and is a misprioritization of time and money.

**Let it be known that we believe this essay to be stellar entrepreneurial advice, but very horrible legal advice. We strongly suggest reading this entire article and consulting a lawyer on its merits regardless of where you stand on the matter.

**And to our intellectual property attorneys, we’re sorry for cutting into your slush fund.

What’s the most important letter in the statement, ‘patents are important?’ It’s the S. As in, plural; more than one. Although we were brought up to believe that a patent would protect us from people stealing our idea, we weren’t told the whole story. The whole story is that if you want to protect yourself from intellectual property infringement, you’re more than likely going to need a portfolio of patents. As in, many.

A Patent’s Worth Is Directly Proportionate To Its Specificity

The more specific you are with what you’re trying to protect, the stronger the patent; in other words, the higher the likelihood it will hold up in court. But wait! There’s a problem with specificity. Being specific about one thing, means you’re dropping the ball on others. Which is why you need more than one. Like five, ten, or even a hundred of them. And no, that’s not an exaggeration. So the very strategy that makes the patent enforceable is the very thing that demands you to need more than one.

A Patent Won’t Actually Stop People From Stealing Your Idea

Even if you have a true infringement claim, you still have to at least start the process of suing them. And that’s not free. It’s the opposite of free. What’s even scarier is that suing someone is almost as expensive on your time as it is on your company’s wallet.

Oh wait! It gets worse again. Let’s pretend that the lawsuit stops those mean people from stealing your idea, but what about the rest of the mean people in the world? Who is going to stop them? You are. The same way you did the first group – over and over and over again. Which means if you go down the ‘get a patent’ route that every lawyer suggests you do, you’re also going to have to go down the ‘make suing people a part of your business model’ route. 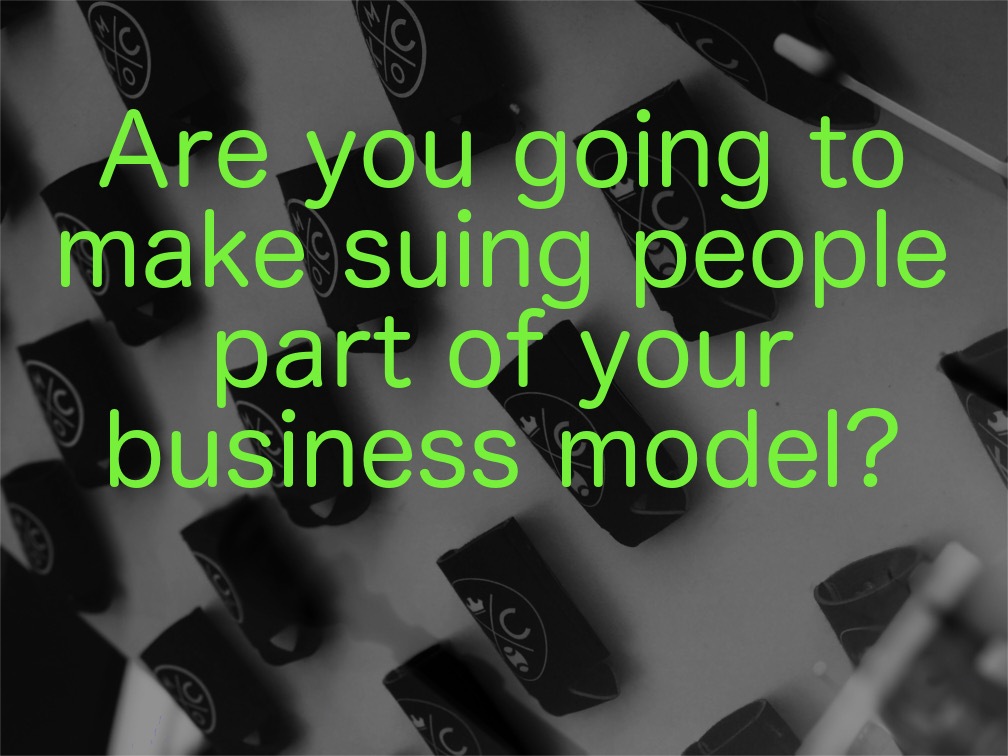 The Main Reason Patents Are Stupid…For MOST Entrepreneurs (not all)

Everything leading up to this point only accounts for about 10% of the reason why patents aren’t the right move for most entrepreneurs. The main reason has to do with rational prioritization of time and budget.

Let’s break that up a bit with an example. Let’s say you’re a guy with an idea. Let’s also say that you’re lucky enough to have $50K in savings as seed capital, or an investment from your rich uncle. Let’s pretend that a prototype costs around $10K; ancillary startup costs are around $5K; the first bout of inventory is around $20K. So what we’re left with is about $15K and a garage full of inventory that we can’t let anyone see yet “because it’s not patented”. So what do we do? Do we patent it? Or what? 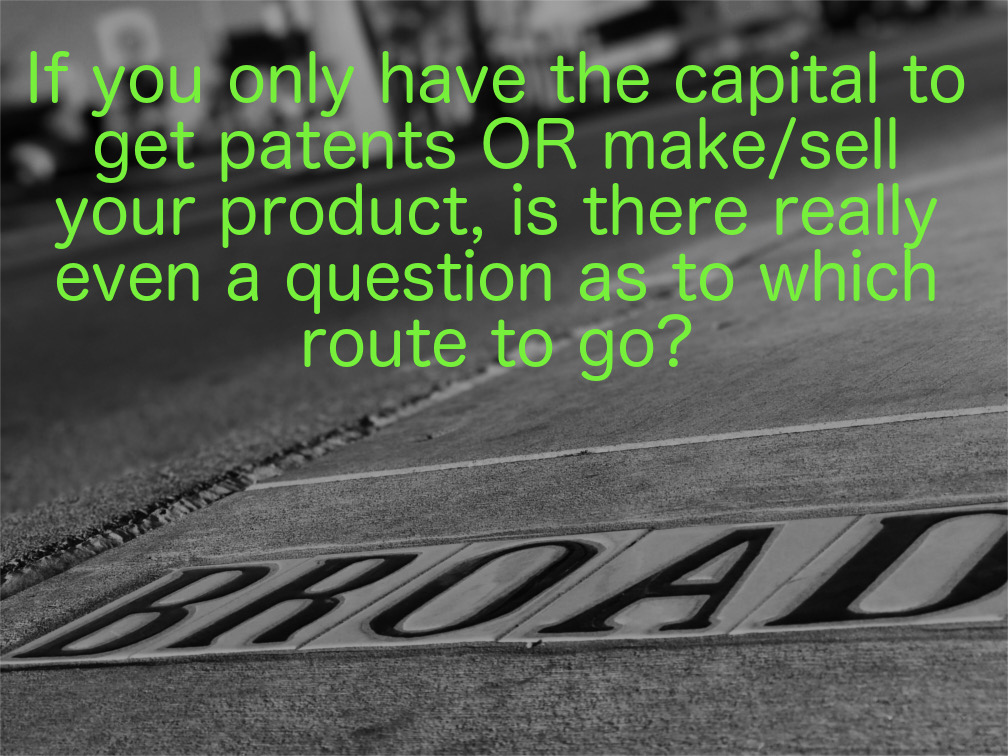 Our humble opinion is that at this step you use the rest of your money to advertise the product to early adopters, otherwise known as the people that are the most thirsty for the product that you’ve created. Yes, someone could steal the idea. But at least you’re live. At least you’ll have customers…and revenue (God forbid). But anyone that does steal your idea is now going to be months, if not years, behind you.

But what about angel investors and venture capitalists?

There are obvious exceptions to this rule; and we’ve written about this point many times before – but professional venture investors do not invest in ideas. They invest in traction.

Yes, patents can be a wonderful thing. But if you only have the time and money for either (a) a single patent or (b) hunting traction – you’re going to want to hunt traction. Otherwise, all you’ll have is a garage full of widgets that no one knows exists yet.

So if you have a million dollars in the bank (yes, it happens – that’s why they call them “one percenters”), then for heaven’s sake – buy a portfolio of patents!!! You’ll still have money leftover to hunt traction and you’ll have a very well rounded business. But for the rest of you – the people that don’t have that kind of loot – think long and hard about where your priorities lay. We believe that half an early stage entrepreneurs priorities should be in making stuff, and the other half in selling stuff. Nowhere in that equation do we prioritize ‘protect stuff’. That comes later.

Is This Bad Advice?

For about 1% of you, yes – this is terrible advice. Some behemoth of a company is going to steal your idea, build a portfolio of patents around it, and then run circles around you in the market. But math says that in 99% of situations (which more than likely means you!), it’d be stupid not to heed this advice.

A good attorney’s job is to advocate for their clients, and to be their legal lighthouse that guides the way to safety. This essay isn’t particularly safe because there are risks inherent in getting to market fast and not worrying about protection too much. A good lawyer never wants to find themselves fixing a mistake they didn’t warn you about. But a GREAT lawyer does a better job than simply saying “get a patent” – and instead helps you weigh the pros and cons of the options. We hope this essay helped you do just that.