Work/life balance is important. We as entrepreneurs need to be able to take a break every once in awhile and relax. We need to separate ourselves from the trials and tribulations of being a startup. So how do we do that? We watch other people suffer through the same thing… 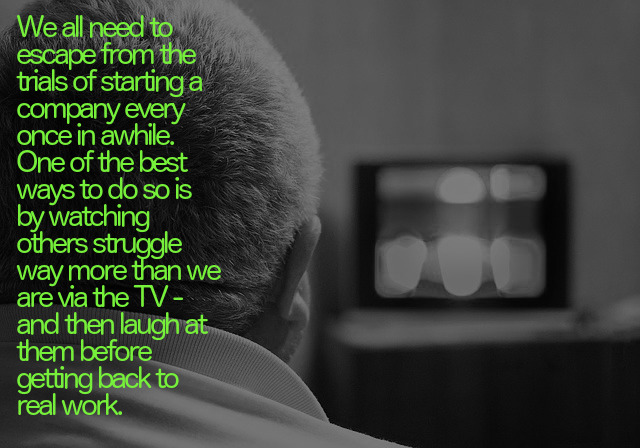 Shark Tank, Steve Jobs movies, reality television shows about fixing up businesses and restaurants – they all fall under the entrepreneurial umbrella that make it just plausible enough to watch, yet just cheesy enough for it to be relaxing. Silicon Valley on HBO is in that club. It’s set to air its third season on Sunday, April 24th. We strongly suggest watching it. Not just for its humor, but there’s honesty a lot of subtle truths to be gleaned. What follows are examples of the show’s past that mirror what it’s actually like to be an entrepreneur.

What’s even more fun about this show is that they all dwell within a business incubator (of sorts)! This makes it particularly interesting for our little business accelerator in Kansas City.

Thank God the creators of the show don’t glorify the process of starting a company. Richard Hendricks (the show’s main character) has to see a doctor about anxiety-incurred night sweats and panic attacks. The entire team sleeps in the same home, in never-glorious bunk beds. Even when they finally start experiencing various bouts of success, the world comes crumbling down upon them, keeping them forever grounded.

Truth: There Will Be Vultures With Ulterior Motives

The team has to set out to find partners – in the form of customers, investors, or generic supporters. Each and every one of them has an ulterior motive other than to simply help them. Their venture capitalist is there to treat them like a guinea pig as he doubles up on six “other compression plays” (AKA he’s investing in Richard’s competitors, a form of investing called indexing); Richard’s old company offers to acquire them, and then realizes it’d be more inexpensive to just sue them for IP infringement; and an eccentric billionaire that listens to Limp Bizkit is using them to stave off being reduced to only two commas (in his net worth). Startups need to acknowledge that people with ulterior motives aren’t bad people. It’s simply how the business world works. People need to get paid, or be given a job, or get a connection they otherwise wouldn’t have had, or whatever. You’re not going to start a company and then one day be greeted at the door by a line of people that want nothing more than for you to become successful. Your job, like the job of the main characters in Silicon Valley, is to navigate these waters by finding one mutually beneficial relationship after another.

To someone that doesn’t own a startup that’s actually gaining traction, one might assume that each episode ending in the startup’s almost demise is a tale written for Hollywood. But it’s not. Weekly, real startups are backed into corners that they must fight their way out of or die. Pied Piper (the name of the company from the show), almost dies when they’re sued by the Google-esq behemoth; or when they delete millions of dollars worth of data from their first customer; or when they turn down an eight-figure acquisition offer to instead take a smaller investment that almost completely falls through…and the list goes on, one episode at a time. But these things happen. Maybe not in such a glorified and exciting fashion, but they definitely happen all the time. An entrepreneur’s job is to not let the crazy-good times make their heads too big, nor let the crazy-bad times force them to quit. It’s just part of the life, and we all must learn to accept it.

Truth: The Real Silicon Valley Is An Anomaly That’s Created Their Own Ecosystem Of Weird Problems And Opportunities

Starting a company in Silicon Valley is unlike starting a company anywhere else in the world. For every resource they have, there is another problem that brings it down to earth. Yes, there’s more money; but there’s also more competition for it. Yes, there’s a vibrant startup community; but it turns the whole city into a popularity contest that defocuses all of them. Yes, there is more tech talent; but they’re also twice as expensive as everywhere else in the country. The team on Silicon Valley has to battle with these things throughout each episode, and it doesn’t look like it will end in Season 3 – it’s probably just going to get worse.

Truth: A Kanban Board Is A Real Thing, And It’s Really Useful

A Kanban Board is a system for prioritizing various features to be built by the business, and it also identifies what stage of development said features are at. It’s a visual representation of the things that are done, being done, and need to eventually be done. It helps the leader take the to-do list and turns it into a tactile representation of what’s on his/her team’s plate. It’s most powerful when used with a team, but can also be used by single founders to keep themselves organized and not switching between too many tasks at once. In the show they find a way to turn it into an immature game, obviously, and hilariously, but that doesn’t change the fact that Kanban boards are effective tools for innovators.

We love how at TechCrunch Disrupt, Richard is about to give a make-or-break presentation, yet all he can concentrate on is some girl that he used to date. We love how Gilfoyle has citizenship issues. We love how Danesh falls in love with a woman that has a stuntman boyfriend, but he uses his programming skills to reverse engineer the fact that the boyfriend is about to die in his next stunt (thus presenting a humor-ridden ethical conundrum). These are several, small, examples from the show that exemplify the fact that life doesn’t stop because you’re starting a company. Bad things happen. Good things happen. Life happens. They’re all just things that must be navigated around like everything else.

Truth: Fundraising Is About Momentum

A great deal of the show’s central theme is around raising angel and venture capital. At first, no one wanted them. Then, when someone wanted them, everyone wanted them. Then, when everyone wanted them, new power struggles emerged that made it borderline impossible to choose one, which sent them right back to no one wanting them. In real life, fundraising is the same way. There are a lot of people in Kansas City that are in a perpetual state of fundraising, and they don’t know why they can’t raise capital. The answer is that an investor doesn’t feel any sort of pressure to hop on the train because the entrepreneur is leaving the train open for boarding at all times. There is no incentive to write a check, because the investor is invariably going to keep getting more information on the investment’s risk factors as it watches it from afar. Startups in Kansas City should concentrate as much as possible on partitioning whole months, or quarters, where their primary objective is to fundraise. Those fundraising efforts should all be complementary to a milestone they’re trying to achieve. Once the milestone is achieved, they can go back to another fundraising period; each time at a higher-and-higher valuation. Thus giving the angel an incentive: they might miss the train, and the next one that comes around is going to be more expensive.

We hope that everyone follows along with us throughout season 3 of Silicon Valley. We’re admitting that most of it is massively exaggerated versions of what real life is like, but who cares? It’s close enough to be realistic, and far enough away that it can be used as time to relax and separate yourself from your actual startup’s stresses.